Since they were little girls, a lot of women have thought about their dream wedding but for many, their daydreams begin with thinking about the proposal. They may be expecting a proposal that is monumental and creative as they would have been building up this moment for such a long time in their minds.

A lot of men believe that their partner would not care how they propose as they would be too excited by the proposal, however that could be a big mistake. While it is true that she would be excited by you popping the question it is also a fact that if it is not creative, exciting or unique she would likely be disappointed by your efforts. You need to up your game and get thinking of creative ways to propose.

She would want to let everyone know how her soon-to-be groom proposed to her but she may be hesitant to tell anyone who asks if she doesn’t have an interesting story to tell about her engagement.

To grab your partners attention, surveys have shown that it is not the amount of money that you spend on your proposal that matters but the amount of detail and effort you put into planning the proposal. A treasure hunt is a non-expensive and easy way to propose. Your friend could hand your partner a note containing clues to the start of the treasure hunt, which could help to build anticipation. 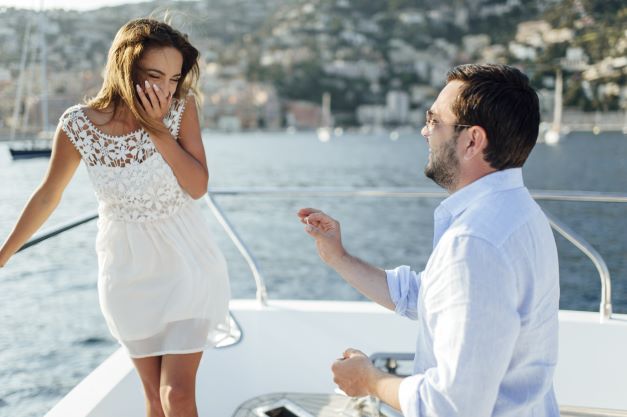 You could include several clues that could lead to small presents such as flowers, chocolates and a personalised music CD and the last clue could lead her directly to where you would want to propose. This idea is creative and it shows that you put a lot of time and effort into your proposal.

Another creative way to propose to your partner is to pay for a full-page ad in a section of her favourite newspaper that she reads often. Make sure that you are present and ready when the newspaper arrives before she reads the ad. This unique idea provides your bride-to-be with a cute souvenir of the day you proposed to her. As a reminder of your creative proposal on that special proposal day, she could frame the ad and place it in a special area in the house.

Even though proposing over a romantic meal in a nicely lit restaurant is considered a popular and classic way to propose, it is not the most creative way. You could mix it up a bit and drops hints that you plan to propose throughout the night but then wait till you’ve paid the check and are leaving the restaurant.

You could catch her by surprise by checking your pockets as if you left something at the table and as your looking through your pockets, you could seize your chance to pull out your engagement ring and propose. By this time, she may be annoyed that you teased her throughout the night but she would quickly forgive you once you show her that shiny ring.

A creative and unique proposal is definitely going to be a memorable one. So as the potential groom-to-be, make sure that you put the right amount of time, energy and effort into planning a proposal that your partner would truly love and remember for many years to come.

Read our 7 Do’s (and Some Don’ts) of Marriage Proposals to help get it right.

Bridal Boudoir Photoshoot: The Perfect Wedding Gift For Your Husband-To-Be

25 Ways to Use a Monogram at your wedding

7 Do’s (and Some Don’ts) of Marriage Proposals

Ultimate guide to thank you notes

28 exciting wedding traditions in Europe to make your wedding fun...

25 Ways to Use a Monogram at your wedding