A honeymoon in York could offer amazing views, friendly local people, and plenty of things to do from historical sites to fine dining.

A UK honeymoon is something that more and more newly weds are thinking about when it comes to their romantic getaway after the big day. And that’s not just due to the fact that Covid has increased the favourability of holidays in the UK! There are thousands of beautifully romantic hidden gems across the British Isles.

If you are considering a honeymoon in York, here are our suggestions for everything do do while you are there.

It’s safe to say that York might wouldn’t be the first thing a newlywed couple thinks of when choosing a honeymoon destination, particularly if you have had your heart set on an exotic getaway. However, choosing to honeymoon in York can be a seriously romantic option with lots of things to do, eat, and places to stay. Plus the money saved on flights can be put to good use on fine dining and once in a lifetime experiences instead!

Where To Stay In York

If you’re looking for hotels in York, they can range from formal large chain hotels all the way up to secluded country house hotels. There are truly so many fantastic places to spend your honeymoon in York no matter your budget!

Whatever you go for, all of the many options can usually cater extremely well to every newlywed’s needs, including our top picks below:

Don’t forget that York has a thriving independent hotelier and B&B community. Many of the best cottages and smaller boutique accommodation can be found by searching online, especially if bespoke hotels are something that you’re after. Many hotels, regardless of size or price, usually offer midweek or honeymoon deals, which many honeymooners happily take advantage of. 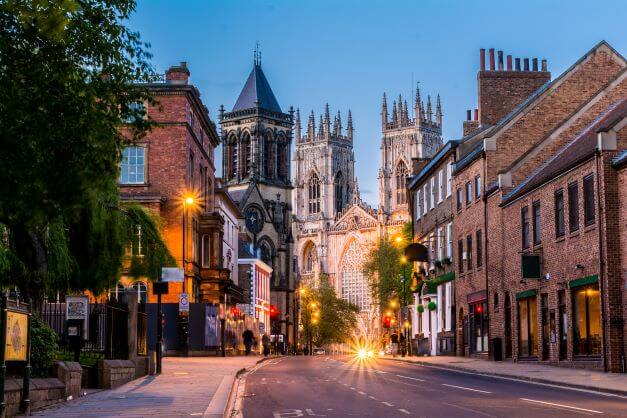 Finding activities for your honeymoon in York will be relatively easy, due to the amount of activities and attractions that York has to offer in general. From the quirky to the more traditionally romantic, there’s so much to choose from:

Don’t forget to have a wander down one of York’s oldest streets, The Shambles. With it’s topsy turvy buildings and a vast array of interesting independent shops, it’s one of the best places in York to make the most out of some retail therapy.

Of course your honeymoon in York won’t be complete without a solid food and drink schedule! As you’d expect from a bustling city, York has a massive amount of dining options, with something to suit every budget. York also has quite a few independent restaurants who offer early bird discounts if holidaymakers are trying to stick to a budget.

If money isn’t too much of a concern, you could check out the below highly rated restaurants:

Of course, it isn’t always necessary to visit a fine dining restaurant every night of your honeymoon and it’s actually worth having a look at the menus in the many hotel restaurants throughout the city, as they often offer exceptional food just within the hotel setting. Many of these hotels will accept non-residents for an evening meal if this is booked prior to attending and it’s a great way of having a fantastic meal without Michelin star prices.

If our York recommendations aren’t quite what you’re looking for, we’ve got plenty of other suggestions which will hopefully make deciding on a UK honeymoon destination a lot easier.

How to Make Your Partner Feel Included On Your Wedding Day...

ABOUT US
My Ideal Wedding provides help planning weddings in the UK and abroad. We aim to be the best UK wedding planning resource and directory for brides and grooms to help plan your special day. Come and see our ideas and useful planning advice to plan your ideal wedding.
Contact us: info@myidealwedding.co.uk
FOLLOW US
© Copyright 2021 My Ideal Wedding - Web Design by My Wedding SEO