Whether you’re wanting to have a traditional Japanese wedding or you want to plan a British wedding in an unusual but beautiful location, Japan is the perfect location to hold your destination wedding.

The big question has been popped – you’ve told friends, family, colleagues, even random people on the street, now you’ve got to start planning your big day. With destination weddings becoming ever more popular, it’s become even more challenging to try and think of creative locations to have your wedding, so you’d be forgiven for not immediately thinking of a Japanese Wedding.

What To Wear To A Japanese Wedding

If you’re opting for a more traditional British wedding abroad, you’ll be fine if you wear the standard outfits that you’d find at any wedding in the UK. However, if you’re attending a traditional Japanese wedding, it’s advisable to wear something quite modest, as most Japanese women usually wear a long dress and keep the colours to a more muted palette.

If you’re the Bride and Groom at a Japanese wedding, you can either wear the traditional white dress and tuxedo combination, or you can opt for one of the beautifully made Kimonos from the local area. Just be aware that if you leave your outfit shopping until you reach Japan, most Kimonos are made to measure and can take a couple of days to complete, so give yourself enough time to buy your outfits.

As is normal when visiting other countries, it’s always best to respect the local culture and traditions, so always make sure that your wedding guests aren’t standing out for the wrong reasons! 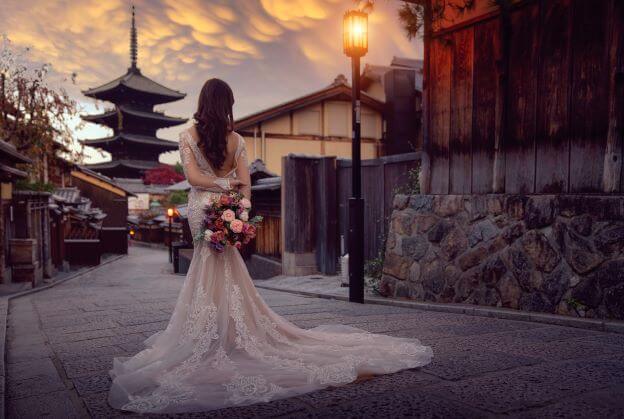 If you want to opt for a traditional Japanese wedding, you will probably want to follow the customs and traditions.

With the majority of Japanese weddings taking place in Spring and Autumn, they usually begin with a formal wedding ceremony which takes place in a shrine with a Shinto priest. During this ceremony, the Bride and Groom exchange ritual cups of Sake, instead of wedding rings.

However, some couples who get married in Japan decide to opt for a Christian ceremony, which is performed in a church or a dedicated wedding chapel by a priest or minister. A more traditional Christian wedding ceremony has become very fashionable in Japan, regardless of whether the couple is Christians themselves. During these religious ceremonies, the couples will exchange wedding rings instead of cups of Sake. Interestingly, some couples choose to have both a Christian and Shinto ceremony, so that they can invite many more people than just the close family who would attend the Shinto ceremony. Some couples opt for both a Shinto and Christian ceremony, for the best of both worlds.

How To Say “Wedding” In Japanese

Surprisingly, there’s no actual direct translation of the word “wedding” to Japanese. The phrase “Marriage Ceremony” is used to describe a wedding, and this is written as “Kekkonshiki”. In Japan, it’s common to describe the individual elements of a wedding, such as the marriage ceremony or after-party, when describing what we would usually call a wedding.

Any Other Considerations When Getting Married In Japan

As with marrying in any other foreign country, it’s always a sensible idea to be aware of the law within the country that you’re traveling to, especially when it concerns your wedding day.

In regards to documentation and registering to be married, Japanese law requires all foreigners who marry in Japan to first prepare a sworn Affidavit of Competency to Marry, confirming that they are legally free to marry, this can be obtained from the couple’s own country’s embassy or the consulate in Japan.

It’s highly recommended that couples also check the UK Government website, to check if there are any further stipulations or things to bear in mind before planning a Japanese wedding.

A Guide to Destination Weddings on a Budget

28 exciting wedding traditions in Europe to make your wedding fun...

A Guide to Destination Weddings on a Budget